As work begins organising Graphic Brighton 2016: Conflict and Adversity – War Comics and Untold Stories of Wartime, here’s a postcard advising to “Save the Date!” regarding 9th and 10th of December (with thanks to Bryan Talbot for permission to use art from his and Mary M Talbot’s graphic novel The Red Virgin and the Vision of Utopia). 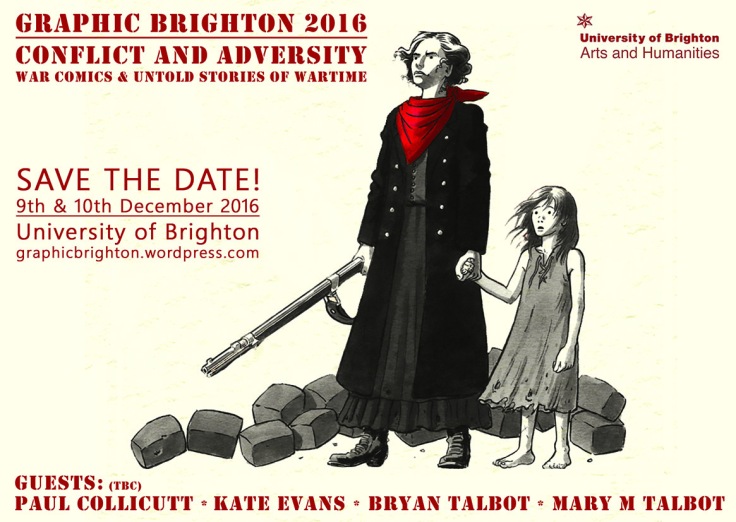 We plan Graphic Brighton 2016 to be a mixture of Academic Panels – a Call For Papers will be announced in September 2016 – workshops, panel discussions with comic book creators and Q and As on stage.

Various guests from the comic book world have been invited – Tim Pilcher and Kate Evans have confirmed, Bryan and Mary Talbot are interested and available!

Cine-Excess gets Graphic [in] Brighton (Autumn 2015)

On 14th November 2015, a mini Graphic Brighton morning took place as part of the annual Cine-Excess cult film conference, held for the second year running at the University of Brighton.

Following academic papers on comics by co-curator Alex Fitch, and cartoonists Lee Christien and Hannah Eaton, Professor Martin Barker (University of Aberystwyth) gave a talk on the controversy surrounding the British Action comic in the late 1970s and then interviewed its writer Pat Mills, alongside 2000AD artist Jim McCarthy.

Pat also received a lifetime achievement award with recognition that this Graphic Brighton happening was a highlight of Cine-Excess 2015.

“Cine-Excess gets Graphic in Brighton” was organised by Alex Fitch and Xavier Mendik with support from the School of Arts and Humanities at the University of Brighton.

Graphic Brighton 2015: Drawing in the Margins

The second Graphic Brighton conference at the University of Brighton took as its theme “Drawing in the Margins”, which is to say portrayals of marginalised groups in graphic novels, marginalised creators, and even people who are highly visible in society but absent from the pages of comics (such as pregnant women).

The programme opened with a free panel discussion on Gay Manga on Friday 1st May 2015, followed by a Myriad Editions ‘Quick Strips’ / Pecha Kucha event featuring a dozen local creators displaying their work.

On Saturday 2nd May various parallel streams included talks on “Older people and comics”, “Do the homeless have a voice in comics” and “Representing the experience of non-verbal Autism”.

You can listen to a podcast of the keynote Q and A – Karrie Fransman interviewed by comics historian and publicist Tim Pilcher.

A recording of the ‘Gay Manga’ panel discussion with Chie Kutsawada, Inko, Ilya and Emma Vieceli, hosted by Alex Fitch.

The conference was organised by Barbara Chamberlin, Alex Fitch and Paul Slater with support from the School of Arts and Humanities at the University of Brighton.

The inaugural Graphic Brighton Conference, held at the City Campus of the University of Brighton took place on 24th May 2014.

You can hear podcast recordings from the conference including:

Keynote interview with Chris Riddell discussing his career as a political cartoonist and children’s book illustrator, in conversation with Alex Fitch

The conference was organised by Barbara Chamberlin, Alex Fitch and Paul Slater in association with C21 – Research in 21st Century Writings at the University of Brighton.