This year’s Graphic Brighton festival is headlined from 7pm on Thursday 19th July at The Phoenix, Brighton, by members of the bands Cud (Will Potter), The Meow Meows (Danny Noble) and Howlround (Robin the Fog) who will be talking about their crossover interest in music and comics before a screening of Night of the Living Dead: Reanimated – the classic 1968 zombie movie reinterpreted by 100 artists with a new live soundtrack DJed by Robin the Fog.

On Friday 20th July there will be a full day of talks by comic creators – including Hunt Emerson and The Surreal McCoy – and academics on the theme of music and comics at the University of Sussex (Falmer). Also, George Hardie (Hipgnosis), will be talking about designing album covers for Pink Floyd and Led Zepplin and using comics in his design work…

To book a FREE ticket for both / either of these events, please visit https://www.eventbrite.co.uk/e/graphic-brighton-comics-and-music-symposium-tickets-46399005675

This year’s Graphic Brighton is on the subject of Music and Comics and is being held in Brighton on July 19th, and at the University of Sussex (Falmer) on July 20th – as with previous events it will mix academic presentations with talks by comic book creators; see full ‘Call for papers’ below… 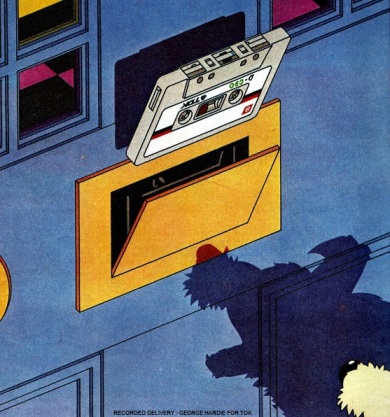 Music and comics have had a connection right from the start, with the title of the seminal newspaper strip Hogan’s Alley taken from a popular song by Edward Harrigan. As the 20th Century progressed these two media flirted with each other for inspiration and style, from Marvel comics based on the rock band KISS, to Duran Duran taking their name from Barbarella. Back room printing presses in the 60s and 70s saw the gig flyer and alternative comix emerge side by side, and comic creators from Alan Moore to Richard McGuire have been inspired by music in the creation of their long (play) narratives.

Graphic Brighton 2018 explores the rich and diverse inter-relationship between comics and music. As an event which aims to be interdisciplinary, we invite speakers and contributors from academic and creator-based backgrounds in comics, visual cultures and music so as to open discussion across the disciplines. We invite 20-minute papers themed around, but not limited to, the following:

Please submit your abstract (300 words) and brief biography (100 words) to B.J.Chamberlin [at] brighton.ac.uk no later than Friday 1 June 2018

This free event will be held at the University of Sussex on Friday July 20th, with talks by artists Hunt Emerson, The Surreal McCoy and George Hardie (Hipgnosis), plus a comic book creators’ discussion and multimedia DJ gig in the centre of Brighton (venue and time TBC) on the evening of July 19th featuring members of The Meow Meows, Cud and Howlround.

This event is funded by the University of Sussex Researcher-Led Initiative Fund.